Mosaics are pictures that consist of tiles (from broken pottery originally). These tiles are arranged in a pattern or they form a picture. In Photomosaic these tiles consist of photographs. There are different types of mosaics out there. However, I am only talking about photo mosaics where I follow my own, rather strict set of rules:
I know some people think this is too tough, but it is my philosophy for photo mosaics. There are several programmes out there that do a really good job in creating photomosaics. A good (but still incomplete) comparison can be found here: www.aolej.com/mosaic/compare.htm. I have had good success with www.djuga.net/retriever.html. Although primarily a picture viewer and organiser, it has a mosaic function that offers some useful options. However, for what I had in mind, none of the software I found was suitable. I wanted to have not only total control over the images, I also wanted to know which files is used as a tile where. So, I programmed my own software.

But which language to use? As I have not yet(?) learned any of the C languages, I'd be stuck with Visual Basic or JavaScript. Not very suitable for this. Luckily, the third language I know, Matlab, is up to the task. As I am working at university, I have access to Matlab. It required lots of coding as it was surprisingly difficult to find a good algorithm for image similarity. First tries were rather devastating. After I solved that, the next task was making it user-friendly. The process is as follows:

Things might stop here, or not... Start with the image we are trying to create a mosaic of: 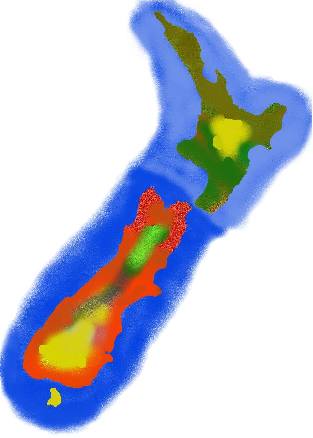 After some minutes of reading in tile images and 1 hour of computing we get a mosaic (of same size): 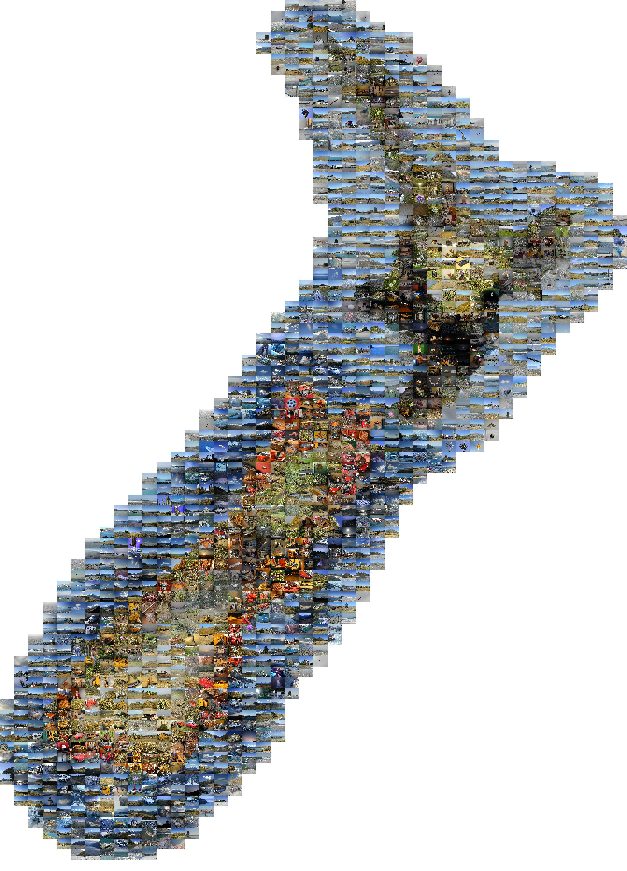 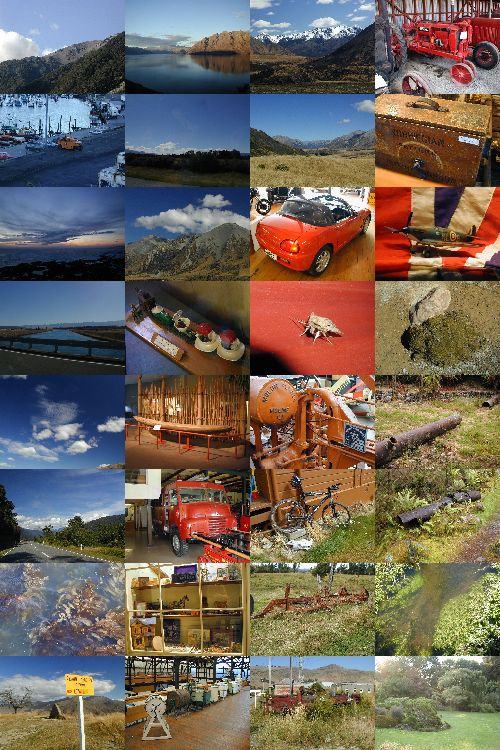 And a look how the final mosaic fits into my flat: 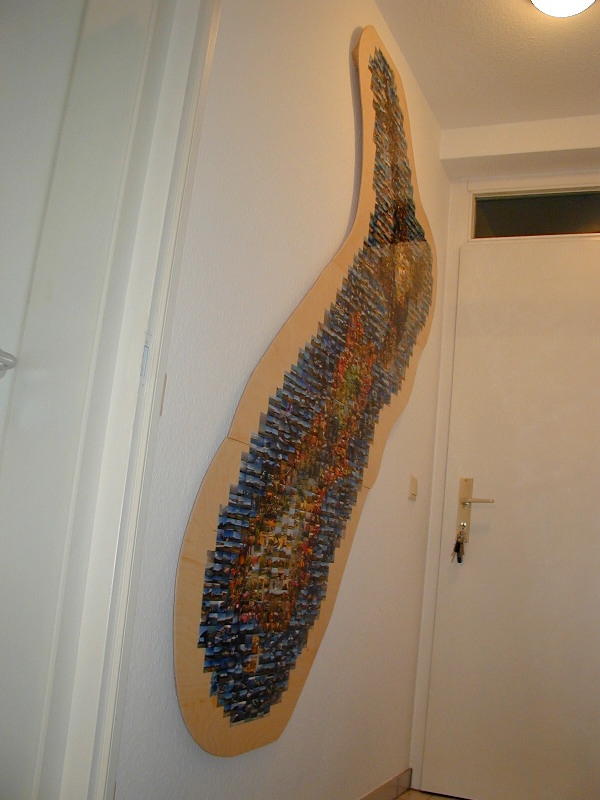 I ordered prints from 60 Supatiles (some where pretty blank, others completely filled), had 8x4 small tiles on each Supertile. Then I bought 4mm wood and glued the Supertiles onto it and trimmed the wood.

The 2005 code worked well, but it had one really problematic restriction: All the images needed to be of the same aspect ratio. But, after my last trip to New Zealand, I had various aspect ratios I would want to use. So in 2007, I set out to write a new code.
Going completely free with the dimensions of the tiles would be great, but I had no idea how to do this. I therefore opted for identical height and scaled width of the tile images. I reduce all possible tile images to a common height. Then, starting at one row, I compare each tile image with the respective master image and choose the best-fitting one. The "match" is basically the difference between tile and the respective section of the master image, weighted by the tile's area.
As an additional function, the code can generate an html page where the individual tiles link back to webpages that display it larger.

I used this code for the first time to create a mosaic of the "365 days" self portrait project of a friend and I used the extra feature to link back to the flickr photopages using an image map. 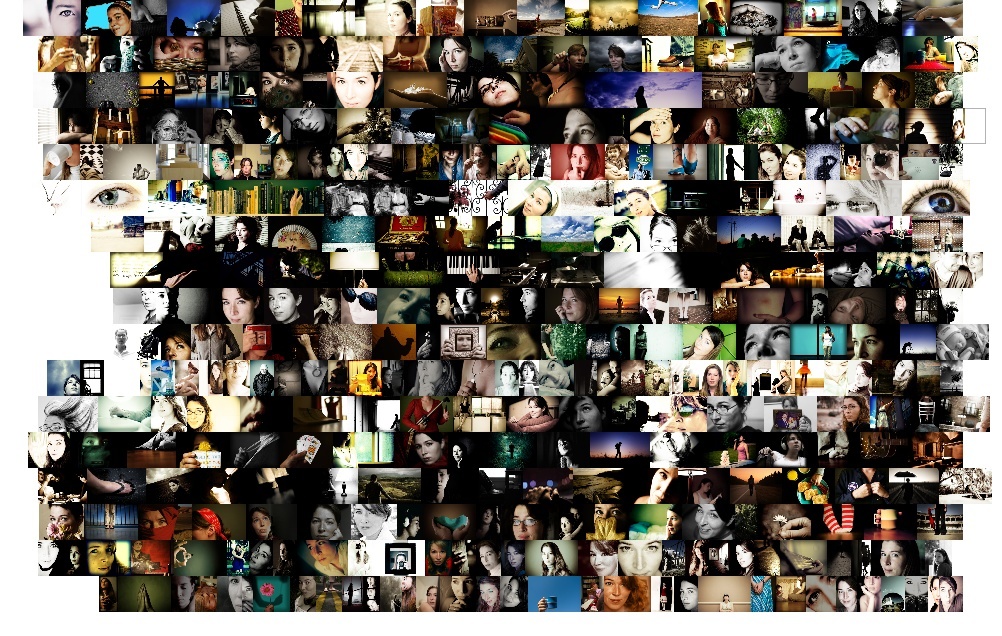 All the tiles are links to Keitha's profile and the respective photo. Hover over a tile to see the name of the shot - I am sorry that this way of displaying is not very useable on mobile screens. The tiles and tile source images are copyright by Keitha.

The 2008 version still was rather restrictive - it was based on rows, which means that vertical photos get less area than horizontal ones. But of course having complete freedom of tile sizes would be a nightmare. Instead, I opted for an underlying grid. For example a square would be 2x2, a standard film aspect ratio would be 3x2, a vertical panorama would be 1x4. If an image does not meet these ratios, the tile will be cropped to fit. There might still be some issues, especially when there are not enough tile-photos available, but it gave me a chance to fill the grid starting ina corner and making the algorithm traverse through the photo.
The problem with that is that it can happen that the first half of the mosaic is very good, but the later half has much worse fit, because the algorithm has run out of all good photos. Think of relatively uniform sky or forest and you can imagine that this might be an issue. Nevertheless, using the full library, the results are pretty good. In the future I hope to improve this and also re-implement one feature of my very first mosaic: The ability to swap a tile against a new one.