What is a polarizer?
It is a photographic filter that usually is screwed in front of your lens.

What does it do?
It removes reflections from non metallic-conductive materials like glass, water, paint. These reflections are often unwanted. Furthermore, it cuts through haze and makes a blue sky even bluer.

How does it work?
Well, it is probably the photographic filter most difficult to understand. To explain it, imagine light as being sent to us as waves. Not a single wave but many. They have different wave-lengths (colours), different orientations and different intensities. 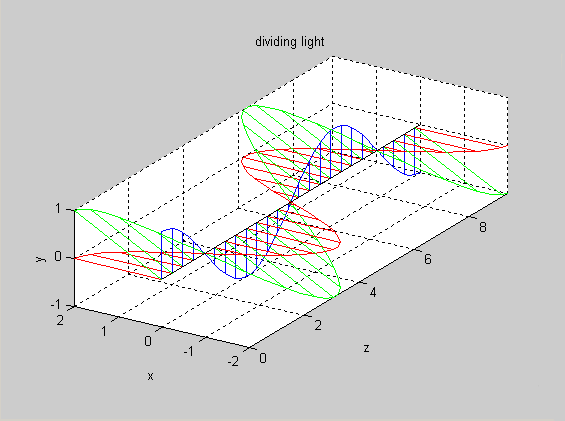 The green wave is divided into an x-wave and an y-wave. This can be done with all the waves.

Let's look at a multitude of waves, namely unpolarized light with different wavelengths: 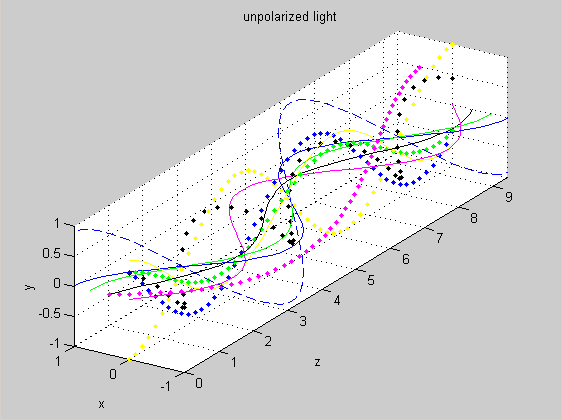 For the sake of clarity, we will now look at only one wave. I don't want (nor could I) give a physics lecture but I have to mention the brewster angle. To explain it, let's first have a look at what happens if a light ray (a bundle of waves) hits a surface: 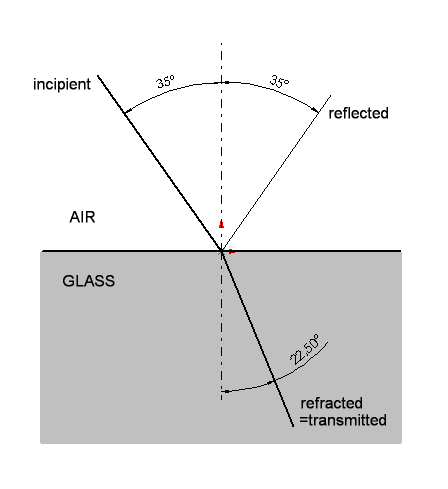 When the angle between the reflected and transmitted ray equals 90°, the angle of the incipient ray is called the brewster angle. This angle is special, because now only light waves that oscillate in the plane perpendicular to the plane shown in the picture gets reflected. (For the reason why, you may consult a book or website about optical physics). Therefore, reflected light is polarized. (For light reflected from conductive materials like metal this is not true.). So when the green wave from the first picture gets reflected, only one of the blue or red "divided waves" will get reflected. If a bundle of waves like in the second picture hits a reflecting surface, only those parts of the waves will be reflected which are perpendicular to the plane shown = oscillating parallel to the reflecting surface. Generally speaking, the reflected light can be represented as a linearly polarized wave, like the green one: 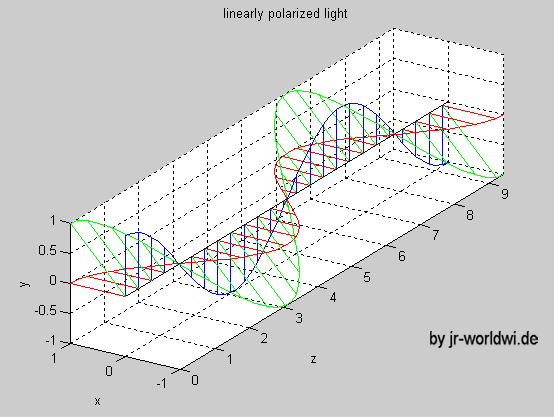 If we want to remove this light, we use a polarizing filter. It lets only light pass that oscillates in a certain plane. This means the polarizer will swallow all light oscillating in other planes. Usually that's about 1 to 2 stops, meaning your exposure time gets two to four times longer, if you stay at the same aperture! To understand its effect, I always imagine a comb. Everything that is parallel to the "teeth" of the comb will pass, everything 90° to them will not pass at all and everything in between will partially pass.

So, what is a linear and what is a circular polarizer?
The linear polarizer is simply the above-mentioned comb. However, some cameras will not work with them. The reason is that these cameras have reflecting optical elements like mirrors in SLR-cameras. I already tried to explain how reflecting surfaces influence the polarisation of light. If the light is already polarized, the reflected light is unsuitable for the camera to use for autofocus and metering. Luckily, there is one solution. A circular polarizer. It makes the linearly polarized light circularly polarized: 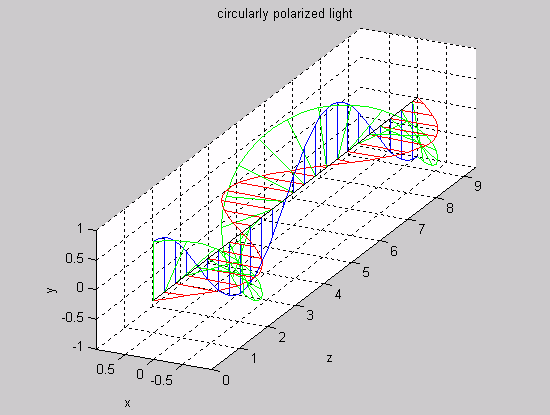 How does it do that? It has a second layer of optically active material. This material is very special. In one direction the speed of light is higher than in the one 90° to it. This is called birefringence. The effect is that the blue or red part of the green linearly polarized wave from the "linearly polarized light" graphic gets slowed down in this layer. It gets shifted backwards by a quarter of a wave length. Therefore this special layer is called a quarter wavelength plate or a quarter lambda plate or quarter wave plate (QWP). Now, in the picture above, the blue wave stays unmodified, while the red one was slowed down. Recombining (the opposite of deviding) these two waves yields the new green wave. But now, this wave is making a circle! It is circularly polarized. If this light hits the mirror of an SLR, it is reflected in a way that will not confuse the internal sensors of the camera.

Are these filters linear or circular different in their effectiveness?
No. But linear filters are cheaper and as they have one optical layer less than circular filters, they often have better contrast than circular polarisation filters.

Which one should I get?
A circular polarisation filter will work with every camera on the market. A linear polarisation filter will not work correctly in SLR cameras and other cameras that use mirrors or prisms. Jeremy has a simple test on his site how you can test if your camera can handle the linear polarisator:
www.dpfwiw.com/polarizer.htm#circular
If you are further interested in polarisation, check out his complete page about it.
Another good forum post is from Ching-Kuang:
forums.dpreview.com/forums/read.asp?forum=1024&message=6913931

Are there any do-it-yourself experiments?
Sure, apart from Jeremy's section about
reversed circular polarizers
that act as warming/cooling filters, there is also the possibility to examine materials with birefringent properties. Pete has put up a very nice gallery:
pbase.com/pganzel/polarizers
Obviously, birefringence is not as rare as one would believe. In fact, Pete wrote in his forum message, that a simple piece of cellophan can substitute a quarter-wave-plate. He notes correctly that you will not achieve exactly one quarter of a wavelength redardation. Obviously it is often enough for SLR to focus.


Side note:
Often materials change the speed-of-light when compressed or extended. This results in strange effects as the light gets retarded accordingly. This was (and sometimes is still) used to examine mechanical parts exposed to loads: Optical stress analysis. You manufacture a model of the original part out of some kind of plastic (Plexiglas for example) with the property to be birefringent when under stress. When it is photographed the areas with high stress show and the design of the component can be altered to reduce the stress. To make it visible, you have to first linearly polarize the light from a light source. Between specimen and camera there is another linear polarizer, turned by 90° (total blocking) towards the first one. So, unmodified light that passes through non-birefrigent areas will not get through to the camera. But the light modified by the specimen is visible.
If you are further interested, I suggest:
www.anu.edu.au/.../OSA_01.pdf
www.mupad.de/.../maschinenbau.pdf [German]


So, back to Pete's simple experiment. What happens? Look at the following pictures.


First, the known picture of two waves a quarter of a wavelength apart and their sum, the green wave:

Now, the view from the front, showing why it is called circularly polarized: 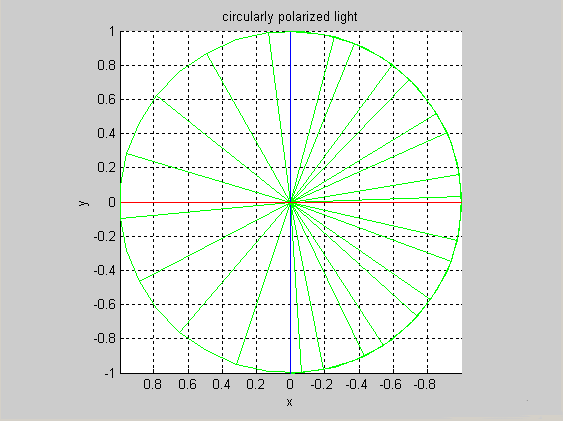 Next up, the 3D-view of two waves a fifth of a wavelength apart: 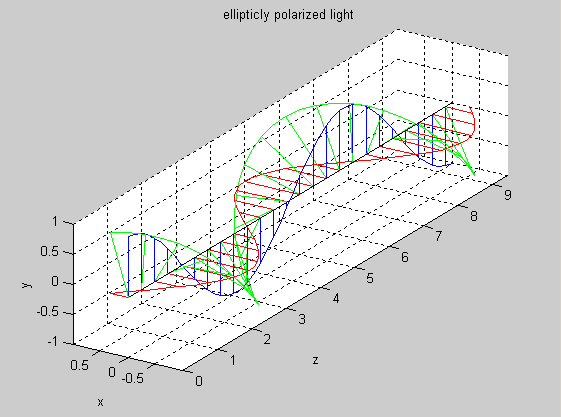 When viewed from the front, it is obvious, that the light is now ellipticly polarized: 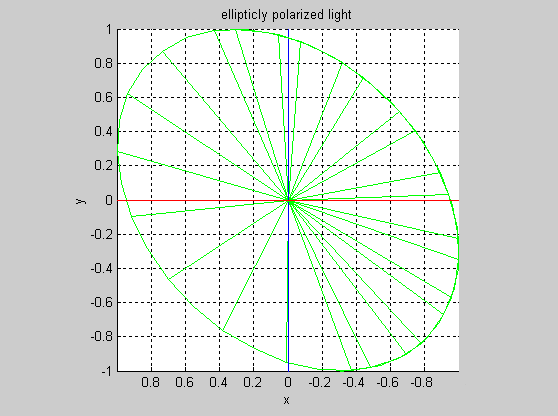 Pete once again has a nice addition, a spectral transmissibility curve for crossed linear polarizers:
forums.dpreview.com/...